I deleted my Facebook account about a year ago. The novelty of connecting with people I hadn’t seen or heard from in years had worn off. Posting status updates or pictures felt fickle, and I wanted to spend more time doing things like reading books or exercising.

Before I clicked on the “Are you sure you want to do this?” button for the fifth time, I asked a friend of my late father whether he thought my dad would have liked Facebook. “Absolutely not,” he said. “You’re father was a face-to-face kind of guy. He didn’t even like talking on the phone.”

I felt good about my decision but received a lot of flak from friends. I think some of them took it as a personal insult. “How could you do this, especially now that you live in China?” was a question I heard a lot.

I told them that I thought Facebook was creating a narcissistic society, where adults competed for attention like children. The Onion once called Facebook a high school yearbook that keeps updating after you graduate. I thought a more appropriate comparison was People magazine, which publishes pictures of celebrities attending exclusive parties, holding hands with a new significant other and pushing a newborn in a stroller – the same kinds of pictures that people often post on Facebook.

People magazine is popular because it gives readers a peek into the daily lives of famous people. By creating your own circle of friends on Facebook, you can have the same thing, only with ordinary people. Co-workers, exes, friends from high school, neighbors. The only thing standing between you and a window into their world is a harmless friend request. And best of all, unlike People magazine, it’s free!

I stayed off Facebook until about a month ago, when I began writing this blog. I created a new account because I wanted to promote it, and Facebook sharing is one of the easiest ways to reach a wide audience. At least half of the traffic generated by my blog comes from Facebook referrals. Without it, I would be speaking to a much emptier room.

After watching the revolutions in the Middle East unfold over the last year and reading stories of how social media played a key role in galvanizing action, I also realized my beliefs about the role of Facebook in society were shortsighted. Facebook CEO Mark Zuckerberg spoke about the purpose of social networks in a 2007 interview with Time magazine.

“I think there’s confusion around what the point of social networks is. A lot of different companies characterized as social networks have different goals — some serve the function of business networking, some are media portals,” Zuckerberg told Time. “What we’re trying to do is just make it really efficient for people to communicate, get information and share information.”

Although my on-and-off relationship with Facebook is back on again (I first had to purchase a VPN to access the website because it’s blocked in China), I still have concerns. I worry about children who use it, and the affect negative remarks could have on their lives. If someone calls you fat and ugly on the back of a school bus and no one else hears it, the insult dies in thin air. On Facebook, it can grow into a lengthy thread.

I wonder how kids being born today who have every significant moment – first birthday, first step, first school play – documented online by their parents will feel when they become adults. I wonder how long it will take until people realize that posting a picture of yourself flipping the bird to the camera after four shots might come back to haunt you later in life. 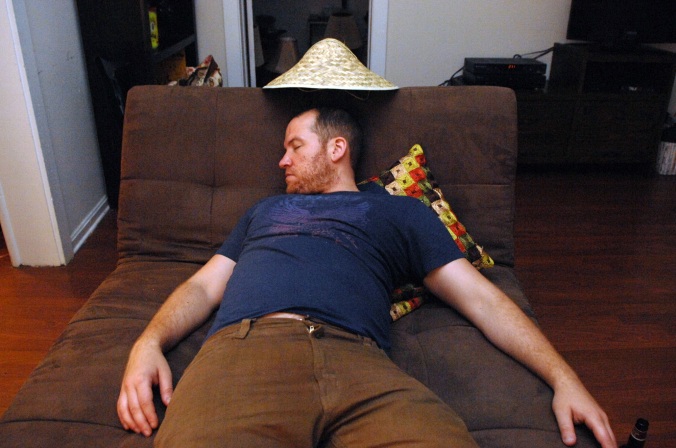 A photo like this could generate a lot of laughs, but is it really worth it?

I wonder where you draw the line between balancing time between your electronic and physical selves, and at what point investing too much in the former compromises the latter.

I’m still trying to figure that out, occasionally biting the hand feeds me along the way.