The screaming started before sunrise. A boy with a high-pitched voice was crying uncontrollably and yelling for someone. I couldn’t make out what he was saying — it didn’t sound like Chinese. I just wanted it to stop so I could fall back asleep.

This continued for the next two days I stayed at a Tibetan hostel in Shangri-la, a city in northwestern Yunnan province. Like a rooster greeting the morning sun, at around 5:30 each morning, the boy would begin screaming, shouting out the same word over and over again until he drifted back to sleep.

When I checked out, a girl who ran the kitchen at the hostel apologized for all the noise. “What was the boy crying about?” I asked. 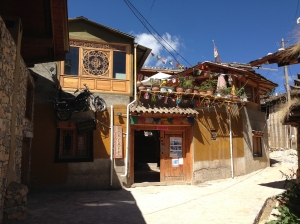 The hostel I stayed at Shangri-la.

She said that he lives at the hostel with his grandfather, who runs the place. The boy’s parents work in another city and don’t come home much.

This sort of scenario is very common in China — parents from villages or small cities leaving their hometowns for more job opportunities and better pay in a metropolis. Their children stay behind and are often raised by grandparents or other relatives.

China has around 61 million “left-behind” children, according to a recent article by Agence France-Presse. “For more than 20 years China’s government has encouraged the rural poor to move to cities as a way to boost growth and lift living standards,” the report said. 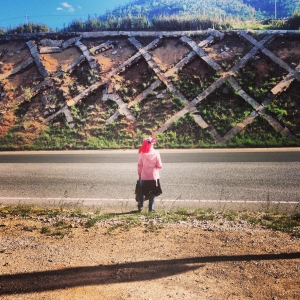 A woman waits for a bus in a rural area outside Shangri-la. Parents often travel hundreds of miles from their hometowns in search of better paying jobs.

When I was a boy, my father worked while my mother stayed at home to take care of me and my two siblings. Dad was a civil engineer, and sometimes his job required him to work long hours late into the night.

I could usually hear his car pulling into the driveway, even if I was in my bedroom at the rear of our house. I’d rush to the door to greet him and throw my arms around his legs. It was a perfect way to end a day.

Some of China’s “left-behind” children only get this opportunity once or twice a year, when their parents come home for holidays.

And while I understand families’ needs to improve their lives and earn enough money to send their children to good schools, what about all the birthdays, basketball games and opportunities to pass along wisdom that are missed while parents are away?

Is the tradeoff worth it? For a lonely boy who wakes up crying for his parents every morning, I doubt it.

One thought on “Cries of a child left behind”