Taipei 101. To those unfamiliar with Taiwan’s tallest skyscraper, it might sound like a stiff drink served at an Asian bar. But, for a five-year period from the time it opened in 2004 to the completion of Dubai’s Burj Khalifa in 2009, it was the tallest building in the world.

With a design that pays homage to Chinese traditions, Taipei 101 is one of the more impressive skyscrapers I’ve seen. Its repeated segments are said to invoke a large stalk of bamboo, the plant of choice for China’s beloved Giant Pandas.

There are eight segments in the main tower, each with eight floors. This was, of course, by design as the number eight in Chinese culture is associated with good fortune and abundance.

This design is best observed from a few blocks away; or at night, when the skyscraper lights up the skies of Taiwan’s largest city.

Taipei 101, as seen from street level. 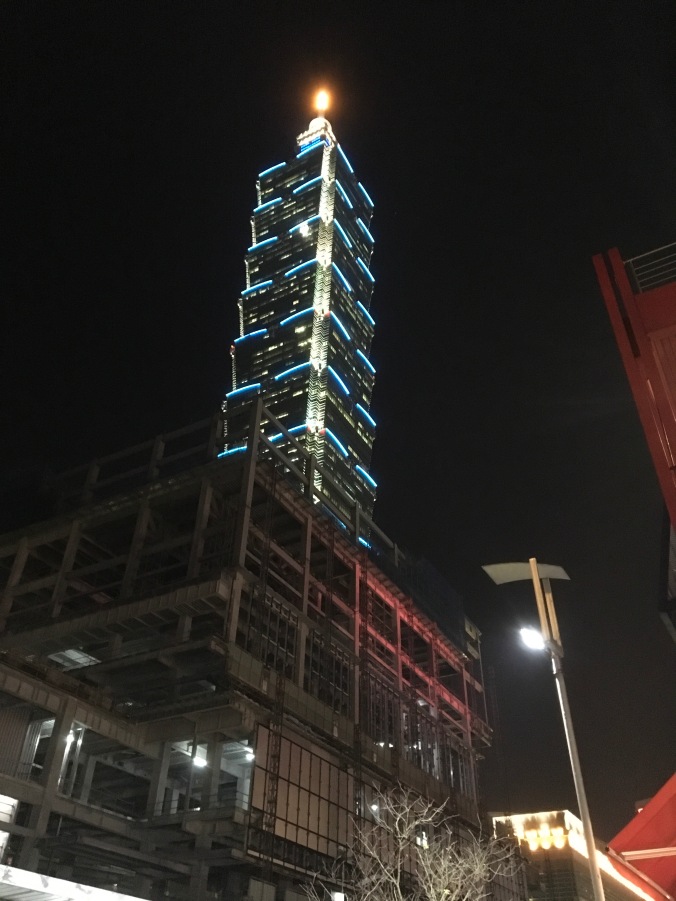 The view from an indoor observation deck on the 88th and 89th floors provides a different perspective: a 360-degree view of the city.

After paying a US$19 admission fee, I entered a crowded elevator on the fifth floor that takes visitors to the observation deck. My ears popped as we shot hundreds of feet up the tower, arriving at our destination in what seemed like only a few seconds.

The deck is enclosed, but that didn’t stop me from getting weak in the knees when I pressed my face up against the glass, the only thing separating me and the hordes of selfie-seeking tourists from imminent death.

The view from the observation deck on the 88th floor.

After snapping several photos and checking out the gift store for mementos to bring home, I got in line for the elevator that takes visitors back down to the fifth floor. It was several hundred people deep and — still jet lagged from the travel — I was in no mood to wait.

Forty-five minutes later, I was finally back at ground level, glad I had made the trip but in the mood for a different kind of Taipei 101 — the alcoholic version.