One of the world’s most recognizable stone monuments is practically in my backyard. Twenty-three miles southeast of Rapid City lies Mount Rushmore, a national memorial to four of the nation’s presidents: George Washington, Thomas Jefferson, Abraham Lincoln and Theodore Roosevelt.

They are arguably four of the country’s most important presidents. Washington led the successful war effort against the British that gave the United States independence and later served as the nation’s first president. Jefferson was the primary author of the Declaration of Independence and advocated for religious freedom and tolerance. Lincoln guided the Union through some of its darkest and bloodiest days during the Civil War, when the country’s north and south states were anything but united. Roosevelt’s greatest legacy may be the efforts he undertook to protect wildlife and public lands by establishing the United States Forest Service.

These men laid the foundation for the prosperity Americans enjoy today. But for the Native people of this land, that prosperity meant an end to their way of life. Their territory became smaller and smaller, until they were forced to live on reservations established by the government through treaties that were often unfair. The American bison, which many tribes depended on for food, tools and shelter, was nearly hunted to extinction.

There was resistance among Indian nations to U.S. military efforts to expand westward, but as the soldiers’ firearms became more accurate and lethal the battles became more one-sided.

One of those resistors was an Oglala Sioux Chief, Crazy Horse, who defeated George Armstrong Custer’s Seventh Cavalry in June 1876 at the Battle of Little Bighorn in Montana Territory. More than 250 members of the Seventh Calvary were killed in the battle, including Custer.

Following the battle, the military hunted down Crazy Horse, and less than a year later he surrended in Nebraska and was taken to Fort Robinson, where he died after being stabbed during a scuffle with soldiers.

Today, Crazy Horse is memorialized on a stone mountain, just 16 miles west of Mount Rushmore. While the memorial to the presidents was carved in just 14 years, the Crazy Horse memorial, started in 1947, remains a work in progress. 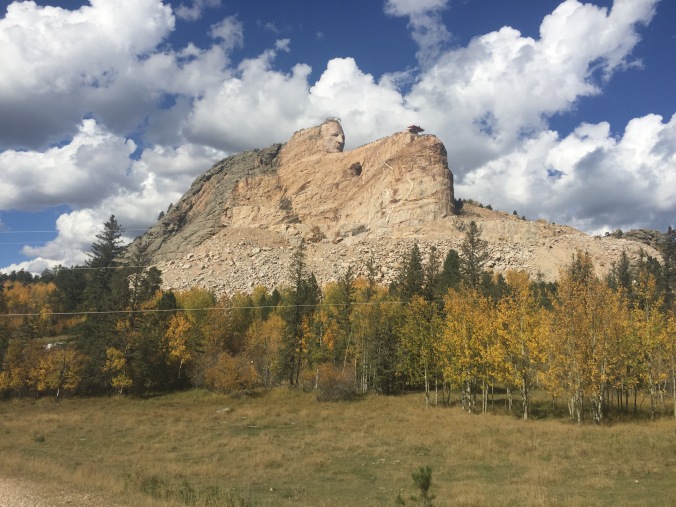 Korczak Ziolkowski began working on the Crazy Horse Memorial in 1947.

The head alone is 87-feet tall.

Once it’s finished, the memorial will become the largest sculpture in the world. 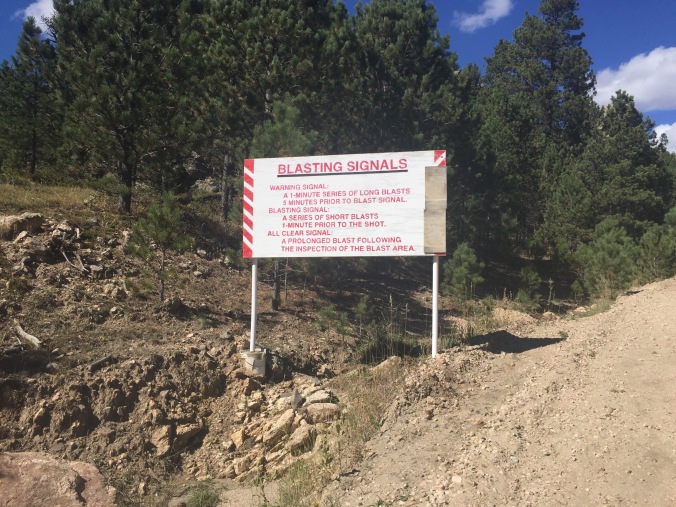 Signs near the memorial warn visitors to listen for blasting signals.

His face is complete, but Crazy Horse’s arm (263 feet wide) and his horse’s head (219 feet tall) have yet to take shape. White paint on the mountainside outlines the spots where construction crews will blast away rock to carve the horse’s head.

Perhaps the main reason the project has taken so long is, unlike Mount Rushmore, the Crazy Horse memorial has received no federal funding and instead relies on donations and revenue from admissions.

I was able to get an up-close look at the memorial last weekend during the biannual Volksmarch, a spring/fall hike that takes visitors more than 6,000 feet above sea level to Crazy Horse’s 87-foot-tall head. It’s one of only two times a year that the public is allowed to hike up to the head.

When viewed from a few feet away, its size is staggering. The chin alone is the size of a basketball goal.

Once it’s finished, the memorial will become the largest sculpture in the world, taller than the presidents’ faces at Mount Rushmore.

But the timetable for completion remains unclear.

Korczak Ziolkowski, who started the sculpture, died in 1982. His wife, Ruth Carolyn Ziolkowski, took over management of construction efforts. Under her watch the memorial became one of the top tourist draws in South Dakota, attracting more than 1 million visitors a year.

Ruth died in 2014, and today her grandchildren and children continue the work that her husband started almost 70 years ago.

In a 2012 interview with the New York Times, Heidi Ziolkowski, one of the couple’s two dozen grandchildren, said she wonders whether she’ll live long enough to see the project finished.

The final work on the Mount Rushmore National Memorial was completed on Oct. 31, 1941, and throughout this year there have been several events to celerate its 75th anniversary.

If you believe Heidi Ziolkowski, who was 24 at the time she was interviewed, it could be half a century or more before the Crazy Horse Memorial celebrates its first.