During a recent trip home to the United States, I flew to Santa Fe, New Mexico, to visit my uncle Jim.

Jim and I became close after my father — his youngest brother — died when I was in fourth grade. Something about his presence helped fill the gap that Dad’s absence left. We’d horseplay in my front yard, and Jim, built like a defense lineman, would sling me to the ground using techniques he learned during tai chi classes. 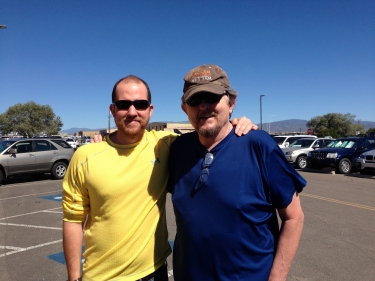 I hadn’t seen him since 2008, a couple of years before I moved to Beijing. The first few times I came home to Kentucky for my annual leave, we talked on the phone but I didn’t visit. I felt guilty, and so this year I decided to go West. END_OF_DOCUMENT_TOKEN_TO_BE_REPLACED

By the time the sun set in Anxi, the only noise I could hear outside was the crow of a lone rooster. The streets near the home where I was staying were empty. The skies were dark, lit up only by stars peeking out from the clouds blowing overhead.

It reminded me of home.

I come from a small town in Eastern Kentucky. Small as in population 6,000. Anxi, population 1 million, is a “small” place too, according to the family I stayed with. END_OF_DOCUMENT_TOKEN_TO_BE_REPLACED

The last time I flew to Beijing from the U.S., I had to pass through a full-body scanner at an airport security checkpoint in Louisville, Kentucky. One of the people in front of me was an elderly man in a wheelchair.

When his turn came, two security officers helped him to his feet and guided him into the machine. “Can you stand on your own?” one of the officers asked.

He kept his arms raised long enough for the machine to take an image of his body and then, with the help of the security officers, returned to his wheelchair. END_OF_DOCUMENT_TOKEN_TO_BE_REPLACED

The Chinese characters for America are 美国 （meiguo), which literally mean “beautiful country.”

Whoever came up with this translation knew what they were talking about. After spending more than 14 months in Beijing, every day in my hometown of Morehead, Kentucky, feels like one of those dreamy scenes from a Claude Monet painting. Dark green grass. Rolling hills. Sunsets you can get lost in.

I took all these things for granted when I lived here. People would ask me about my hometown and I’d usually say something like, “It’s small, has only one McDonald’s and nowhere to shop.” I talked a lot about the things Morehead didn’t have, which – I now realize – is what makes it great. END_OF_DOCUMENT_TOKEN_TO_BE_REPLACED

Father’s Day is one of the few days out of the year that I’m actually glad I live thousands of miles from home.

If I were back in Kentucky, I might drive to Kroger and buy a mismatched bouquet of flowers and take them to a graveyard not too far from where I attended high school. I’d pause before getting out of my car, maybe fiddle with the radio for a minute or two and take a deep breath. I’d probably be alone.

I’d find my father’s grave and stare at it for a while. His first name, David, is my middle name. I’d look at the year of death – 1989 – and think about my life before then. The memories I have are coated in the kind of yellow tint you might find in an Instagram photo. END_OF_DOCUMENT_TOKEN_TO_BE_REPLACED

A few months after I graduated from college, I moved to Paducah, a small town in western Kentucky, to work for the local newspaper. I didn’t like my first apartment and after a year living there wanted something bigger. I decided to rent the top floor of a two-story house with one of my co-workers.

As I was filling out paperwork for the lease, I noticed the landlord looking at my roommate. He and I were both clean cut, slender and in our 20s. “Now, you’re not one of those fag couples, are you?” asked my landlord, who was probably in his 50s. “They’re practically taking over the neighborhood.”

Our home was in a neighborhood that had been designated as an arts district. Artists who bought property in the area were eligible for sizable grants to make improvements to their home. The project attracted artists from all over the country. And some of them were gay.

We weren’t, but I didn’t feel the need to tell my landlord. If I were gay, would that make me less capable of paying my rent on time? Less trustworthy? END_OF_DOCUMENT_TOKEN_TO_BE_REPLACED

In November 2005, I wrote a story about a helicopter used in medical emergencies.

When I went to take a look at the helicopter, the pilot invited me to go for a ride. “We can go wherever you want,” he said.

“Let’s fly the path of the tornado,” I suggested. END_OF_DOCUMENT_TOKEN_TO_BE_REPLACED

I was riding in the back of a cab on a recent afternoon when the driver looked up and said he had a message for me.

“The 21st century belongs to China,” the man, in his 50s, said in Mandarin. “For every 10 cents we earn, we save 9, that’s why the Chinese were not really affected by the global financial crisis … Foreigners are now coming here to learn how to save money.”

I smiled and kept my mouth shut, as I often do when I’m told that China will pass the United States as the world’s top economy. It’s a common belief these days, not only here but in the rest of the world. The reason? As Bill Clinton would say, “It’s the economy stupid.”

“This is especially the case in Western Europe, where the percentage naming China as the world’s top economic power has increased by double digits in Spain, Germany, Britain and France since 2009,” Richard Wike, associate director of the Pew Research Center’s Global Attitudes Project, said last month in a discussion on US-China public opinion. 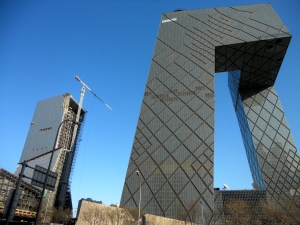 A luxury hotel under construction beside the gleaming China Central Television tower in downtown Beijing. Construction projects can be seen in many large cities in China, the world's second-largest economy.

Meanwhile, the Chinese, by almost a 2-to-1 margin, still rate the US as the world’s top economy, Wike said. END_OF_DOCUMENT_TOKEN_TO_BE_REPLACED