I sprained my left ankle over the weekend. I wish I had a good story to go with it — that it happened as I pushed a child out of the path of a moving bus, or dove to catch a 500-year-old Ming Dynasty vase that was falling from a shelf.

The truth is I injured it while walking out of a video game-themed bar. It was dark. I had been drinking (a little). I was angry, after inexcusably losing a few games of Connect Four, and worst of all, not paying attention.

I missed a step and heard a crunching sound. Within a half hour, my ankle had swollen to the size of a baseball. Since then I’ve been on a steady diet of Advil, and tomorrow I’ll go to a hospital to have my foot X-rayed.

That I would injure myself while living in Beijing is not surprising. This city is full of broken-legs-waiting-to-happen for the inattentive. Pedestrians locked into their cellphones ignore bikers when crossing the street (I’ve dodged, and cursed at, more than a few). Motorists routinely drive within inches of bikers and pedestrians to get them to speed up (That might be OK in Grand Theft Auto, but not in real life).

Many old homes in Beijing have an elevated doorstep, which — according to traditional belief — helps keeps the evil spirits out (Never really understood how this one worked, unless evil spirits are 6 inches tall). 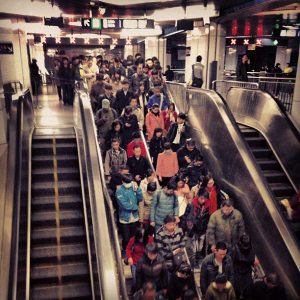 Underground, cleaning crews at the subway station in my neighborhood have an odd habit of mopping the floors around rush hour, as if they have a sinister streak and are trying to invite disaster. Getting on and off the trains can be dicey during peak times, as pushing and shoving are the preferred means of getting through a crowd (Even old ladies can be vicious).

A couple of years ago, I hiked an unrestored section of the Great Wall. The stairs were crumbling in many areas, and it was easy to trip if you didn’t watch where you were going. How horrible would it be to turn an ankle out here and then have to hobble back to civilization, I thought.

At least it would have been a good story.

The Great Wall, where if you’re not careful, the next step could be your last.

Dali is so beautiful that it can be downright dangerous.

I was riding a bike through the city’s Old Town, taking in the scenery and historic architecture, but not the giant pothole that lay in front of me. The next thing I saw was concrete.

Fortunately, I landed left knee first, and suffered only a few bruises. I hobbled to a nearby pharmacy and, using broken Chinese and a little point and grimace, described what I needed. I felt embarrassed, but if any Chinese city is going send me head over heels I’m glad it was Dali. END_OF_DOCUMENT_TOKEN_TO_BE_REPLACED

Many of China’s temples and churches were wrecked during the Cultural Revolution (1966-76), when communist leaders encouraged young students and workers to destroy symbols of “old China.”

Fortunately for preservationists, Beijing’s Niujie Mosque survived. The mosque was built in 996, during the Liao Dynasty (907-1125), and is the oldest temple in the capital. It’s even older than the Forbidden City imperial palace, which began construction in the Ming Dynasty (1368-1644). END_OF_DOCUMENT_TOKEN_TO_BE_REPLACED

I imagine it got lonely up here at night in the darkness, 12 meters off the ground. It was probably quiet too with the entire city sleeping, and with no cell phones, no radio, no TV. Just a bow and arrow and maybe some food and water to tide you over till the morning.

The sunrise must have been brilliant, with a view extending several kilometers into the countryside. Even the most indecisive minds likely had ample time to make judgments about the intentions of men approaching the gate. Business or battle. Friend or foe.

The towers where the first protectors of Xi’an patrolled in the 14th century are today home to merchants peddling cheap souvenirs and renting bikes to tourists. There is no view of the horizon anymore, thanks to scores of high-rise apartment buildings and air pollution from factories. The silence is gone too, as cars and buses lined bumper-to-bumper rumble through the wall’s gates all hours of the day, entering the heart of a growing city with a population of already 8 million. 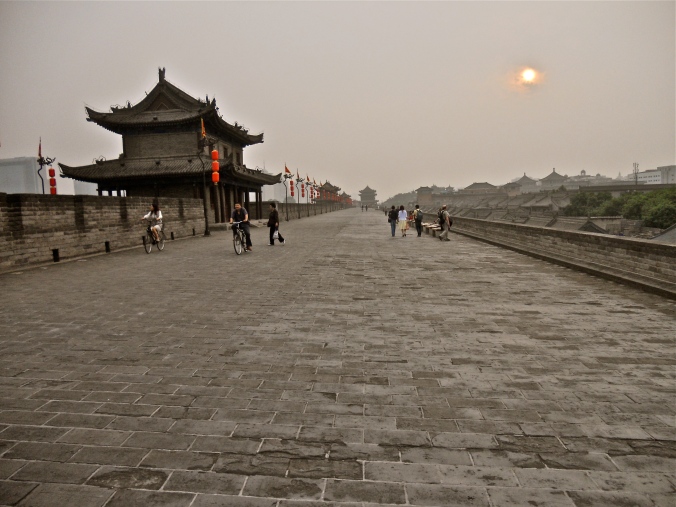 A street in the city center that leads to one of the wall's gates.

The wall is now a tourist attraction, one of many sites that draw visitors from around the world to Xi’an, in northwest China’s Shaanxi province. The wall, shaped like a rectangle, surrounds the city center. It was built in 1370, during the Ming Dynasty (1368-1644), and is one of the best preserved ancient walls in China. END_OF_DOCUMENT_TOKEN_TO_BE_REPLACED