Air pollution reached “hazardous” levels in Beijing on Saturday. Some scientists have labeled the city as “unlivable” because of the poor air quality.

Pollution masks have become a part of everyday life in the capital. I started wearing them a couple of years ago, after I bought a bike and began using it to commute around the city. 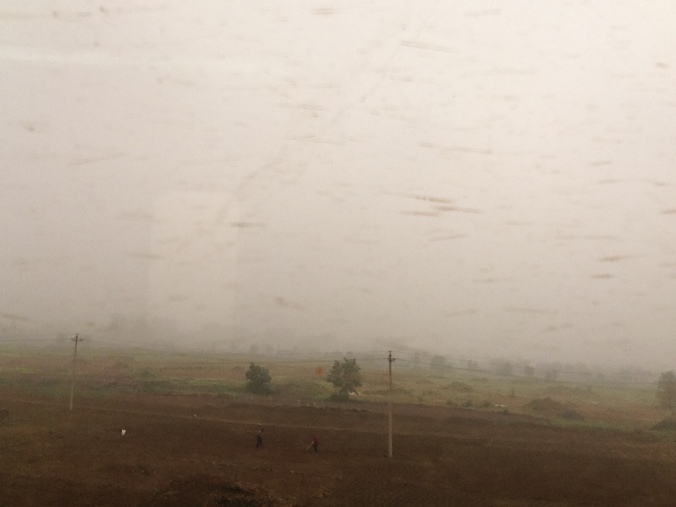 View of suburban Beijing from a subway car. An Australian soccer player who spent a year in China told the magazine FourFourTwo that playing in the smog “was like closing your garage door, turning your car exhaust on and running around in the enclosed space.”

I was standing at a bus stop recently when a lady got in line behind me. She put down her bags and began twisting her arms from side to side.

With the grace of a gymnast, she raised one of her legs onto a metal railing at least three feet high. With her leg still propped up, she bent toward her foot, her chin nearly touching her ankle.

Did I mention she looked like she was in her 60s? END_OF_DOCUMENT_TOKEN_TO_BE_REPLACED

Over the weekend, I hiked to the top of a mountain at Fragrant Hills Park, an imperial garden in northwest Beijing. The park is well-known for its Smoke Tree leaves, which turn red in late autumn, attracting thousands of tourists.

I reached the peak – 557 meters above ground – in an hour and a half, and after I climbed the final set of stairs I turned around to take in a view of the city. Just as I pulled out my cellphone to take a picture, an old man using a walking stick passed me. He was hiking barefoot and shirtless, and moving at a brisk pace. He must have been at least 60 and was fit too, especially for his age.

I wouldn’t want to challenge this guy to a race.

While I stood in the shade to collect my breath and give my burning legs a rest, the man kept going, passing a large rock formation and an ancient temple, until I could no longer see him. END_OF_DOCUMENT_TOKEN_TO_BE_REPLACED

After a lengthy attempt to lower the quality of my life, hypertension died last week. It was 1 and a half.

Hypertension was declared dead in an email I received from my doctor. “Great news. You don’t need medications now. This was a good ‘scare’, so you will have a healthy lifestyle now!” she wrote.

It is survived by the half empty boxes of blood pressure medication scattered around my apartment: 30 mg of Adalat, 12.5 mg of Carvedilol and 5 mg of a generic beta blocker.

I met with a doctor in Beijing for a follow-up checkup earlier this year.

Hypertension was born in my body in January 2012, after a doctor in the Philippines discovered my blood pressure was dangerously high following a severe bout of lightheadedness. Its interests included wrecking havoc on my body, including heart palpitations and anxiety attacks. END_OF_DOCUMENT_TOKEN_TO_BE_REPLACED

I really wanted to go running outside this morning.

I’ve got a Chinese lesson in two hours, and my brain seems to function better after a long, hard run. I’m also making progress in losing weight, down more than 15 pounds from a year ago.

But when I peeled back the curtain to check the weather, my hopes for a quick workout were dashed. After a couple of blue-sky days last week, the pollution is back. Buildings a couple of blocks away from my apartment are barely visible from my ninth-floor window. The air is a grayish white. 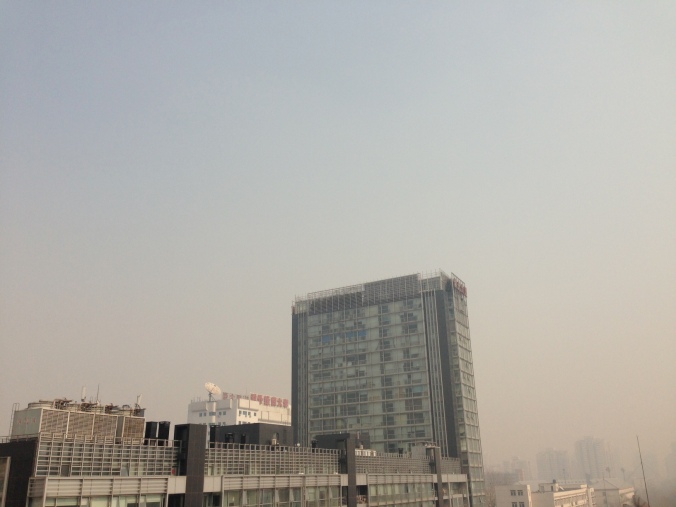 The view from my bedroom window this morning.

The latest message from the US embassy, which monitors air pollution and releases readings hourly through its Twitter feed, said the air today is hazardous. The embassy rates air quality based on the amount of PM2.5 in the air – fine particles that are 2.5 micrometers in diameter and smaller. Common sources are power plants, industries and automobiles, according to the U.S. Environmental Protection Agency.

I’m used to this by now: this process of getting up, looking out the window and checking the US embassy’s Twitter feed – all so I can make an informed decision about whether I can run outside without damaging my health. END_OF_DOCUMENT_TOKEN_TO_BE_REPLACED

Before moving to China in 2010, I had always been a model of good health. Not overweight. Perfect blood pressure. I drank beer and rarely met a pizza I didn’t fall for, but almost always balanced it out with exercise and more than enough sleep.

Something changed in Beijing. Exactly what, I still can’t put my finger on. Dishes here tend to be on the oily and salty side. The air, water and streets are dirty. That can’t help. And I work nights – 5 to 12 most evenings – whereas most of my jobs in the U.S. were day shifts.

Whatever the cause, my body’s changed. My blood pressure runs high, and because of that I feel anxious. I find it harder to relax, and I spend more time worrying about what could be wrong with me instead of thinking about what to cook for dinner or what to buy my girlfriend for her birthday. END_OF_DOCUMENT_TOKEN_TO_BE_REPLACED

I was having dinner with friends one evening when I felt a numbness in my chest. I thought maybe it was from something spicy I had eaten, so I excused myself from the table and walked to the bathroom. I splashed water on my face and paced in the stall, hoping the feeling would go away. But it just got worse, spreading from my chest to my left arm. My hands grew cold and clammy.

I went to the hospital later that night, and found out that my blood pressure was unusually high: 160/90. She asked me to return the following morning for a laboratory tests, including a blood test. I, of course, didn’t go back.

I’ve always felt like I could take care of my health on my own, just by eating properly and getting plenty of exercise. I’m stubborn too, which I inherited from my parents. I’ve watched my mother drag herself into work for a 12-hour shift for the seventh day in a row, when most people would have been bedridden. My father didn’t like to go to the doctor either.

A few weeks before he died when I was 10, we were playing catch in front of our house when I hit accidentally him in the thigh with a baseball. A bruise that should have been the size of a golf ball swelled to the size of a grapefruit. He promised he’d get it checked out but kept putting off making an appointment. He didn’t realize it at the time, but his blood wasn’t clotting like it was supposed to. He finally made an appointment for a Tuesday. He suffered an abdominal aneurysm two days before the scheduled appointment, and died on a Sunday. END_OF_DOCUMENT_TOKEN_TO_BE_REPLACED

USA Today reported last week that Burger King was making a series of changes to its menu in an effort to create a new image. It wanted to offer more healthy options.

“It doesn’t sound like Burger King,” the article said. “There’s a quiet whir of blenders crafting made-to-order smoothies with real strawberry, banana and mango pieces. Nor does it taste like Burger King. Not when one of its three new salads is topped with tangy apple slices and dried cranberries, and covered in an apple cider vinaigrette. You can even get made-to-order frappes.”

The fast-food chain’s home page shows pictures of the new items, but none of the juicy patty of meat for which it is named. Why Burger King wants to reinvent its image is beyond me. END_OF_DOCUMENT_TOKEN_TO_BE_REPLACED

I’ve probably wasted a few weeks of my life looking into the mirror, staring at the endangered grassland atop my head where red curls once grew. I tilt my head and adjust the light in the bathroom. I apply gel to prop up the strands that are too weak to stand on their own. And then I look again.

I began losing my hair at 22, in my senior year of college. At first, it was like a slow drip. A few hairs at a time. By my late 20s, the pace quickened, and I helplessly watched my hairline move higher and higher.

I considered intervention and scanned hair-loss products at grocery stores, always late at night to avoid being seen. I even carried a bottle of Rogaine to the register once, but stopped short of buying it at the last second. Better to bald gracefully than to try to fight it.

With a college roommate and my sister in March 2008. (Photo by Erin McCracken)

By the time I turned 30, my hair had thinned enough that you could see my scalp in several places. If I didn’t wear a hat to the beach, my head burned. My mom tried to reassure me, “It’s really not that bad.” My brother had a different opinion. “No dude. It is that bad.” END_OF_DOCUMENT_TOKEN_TO_BE_REPLACED